In 2019, it coincides with the 80th anniversary of DC Comics Batman. A series of themed events will be held around the world to celebrate together. Hong Kong will also host the Batman 80th Anniversary Night Run in West Kowloon Cultural District (BATMAN NIGHT RUN)

The Hong Kong Station will host Batman’s 80th Anniversary Night Run on September 21, 2019, in the West Kowloon Cultural District. LONG LIVE THE BAT! Batman spirit lasts forever! This year’s Batman 80th Anniversary Night will run for a total length of 4 kilometers. This event is also a rare opportunity to have a different experience for fans and a limited collection of products.

All fans are invited to seize the opportunity to sign up for this meaningful memorial night run! There are hero group and the villain group, including Batman Batman Group, Harley Quinn Clown Girl Group, and Joker Clown Group. Hurry up and gather friends and family to join us! 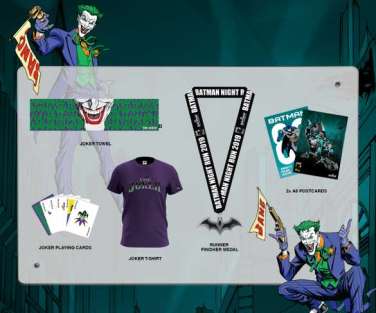 Participants are free to choose to join the hero group or the villain group, once collecting the Batman night run to limit the surrounding goods. On the same day, the most stylish equipment of the selected character will be worn, as well as a variety of classic and creative heroes and villain photo zones, so that all fans can take pictures!