On 8th Jan 2019, one of the leading travel information website in China, Mafengwo, together with the Japan Anime Tourism Association, announced to start providing information about anime pilgrimage to Chinese tourists, which makes anime pilgrimage becomes the hot topic again recently.

So what is anime pilgrimage?

As an anime giant nation, there are quite a lot of anime and comic stories take place in the real world locations in Japan. The fans would treat these locations as ‘holy sites’ and visit them frequently, to enjoy the feeling of ‘being a part of the anime’. The anime pilgrimage successfully attracted many tourists to visit the sites and already developed into a mature industry chain. According to the research carried out by Hankyu Travel in 2018 about the most popular buzzwords related to traveling, anime pilgrimage has become the first place (the second is the mysterious tour and the third is night pool). This reflects the popularity of anime pilgrimage in Japan. 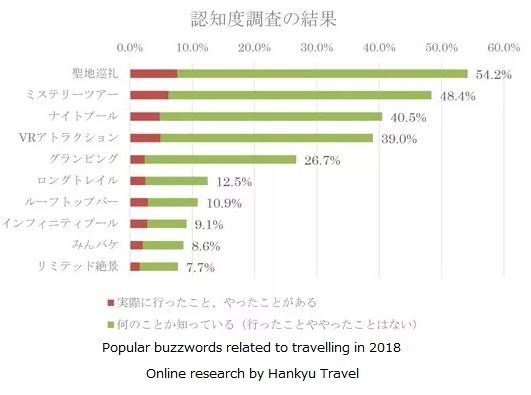 Thanks to the popularity of the anime, the anime pilgrimage also brings a huge market to some small towns. Take Kuki in Saitama prefecture as an example, the number of visitors traveled to Washinomiya Shrine in 2007 was 130 thousand. But after the release of the popular anime, Lucky Star was released in the same year, the number of visitors went up to 300 thousand in 2008 and up to 470 thousand in 2016, as there are scenes taking the Shrine as one of the main scenes in the anime.

The other example is related to the famous anime movie ‘Kimi no Na Wa’. Furukawa in Kifu Prefecture was a non-famous, small town once. But as one of the main background of the movie, the small town has become famous and attracted many fans to visit the place, especially the young ladies, as they wish to take beautiful photos as the movie shown.

The popularity is not just for the Japanese, but also attracted many tourists from overseas. According to Mafengwo Data Research Center in China, the top popular anime location among Chinese tourists is Slam Dunk, while One Piece and Doraemon come next. The spots are always full of tourists.

On top of this, according to the same research, the average money spent by the anime pilgrimage tourists are more than normal tourists. Therefore, Mafengwo decided to explore in this area and join hands with the Japan Anime Tourism Association. In the future, not just in China, but the market in other Asia countries are also expected to grow.