Idols are referring to the talents who are trained to a wide range of roles such as singing, acting, modeling, etc. The fans and followers admire those idols and willing to support them in the way of going to concerts and buying the official goods. This entertainment industry can said to be mature but in recent years, there is a new kind of ‘idol market’ coming up which has successfully attracted many young generations.

‘Virtual idols’ were first developed from the 90s. The whole concept is to create an idol for the fans which is not a real human being. The first generation which has recorded a great success is the characters from the simulation game ‘THE IDOLM@STER’. The idols in the game have become the characters which get the support from the players, just like the real idols do. The second one comes to the famous Hatsune Miku. Hatsune Miku is a Vocaloid system with artificial sound and anime outlook. The character is so famous that she can have her own concerts in Japan, China, USA, Indonesia, Mexico, etc. 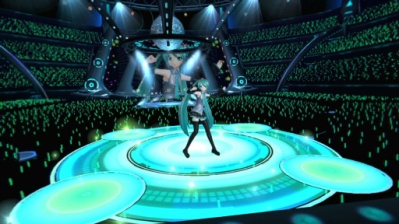 The ‘virtual idols’ are keep evolving. From late 2017, there are some more new kinds of virtual idols have debuted. The first one is called ‘Vtuber’, inspired by the Youtubers on the Internet. Youtubers would also take their shots and share the interesting videos to the audience, in order to get a group of fans. As the same token, ‘virtual idols’ can also have their own channels share their songs and dances to the world. One of the examples is ‘Kizuna AI’; she owns her ‘A.I. Channel’ on Youtube and shares her news every day from 9pm. Until now, there are more than 2.4 million followers and this popularity makes Kizuna AI become one of the most successful Vtuber, having collaborations as spokesperson of famous brands.

The second type of new ‘virtual idols’ is combining both virtual images and real human being. The one is now under the spotlight is ‘Aqours’. The group is formed by 9 voice actresses from the anime ‘Love Live’. However, when they attain events, they would not show their face but instead, using 9 different anime images to represent them. The group is so famous that they were invited to the NHK Kōhaku Uta Gassen, which is one of the most important music shows in Japan.

Not only just in Japan, but the ‘virtual idols’ are also developing in other countries. In China, ‘Luo Tianyi’ is the upcoming vocaloid character. She attained the official Chinese New Year show and had her concert Vsinger Live in 2017. Recently, she is even collaborating with Japanese fashion brand and start developing in Japan. It is foreseeable that the development of ‘virtual idols’ would be one of the main focus in the future entertainment.