The second live performance ‘LIVE @ ZeppVR2’ will be held at Diver City, Tokyo

Sony Creative Products (SCP) signed a contract with SACRA MUSIC under Sony Music Labels in Jul, 2018, started the licensing business of the popular VTuber Kaguya Luna. Sales promotion, including stationery and general goods, were being held by using Kaguya Luna’s motifs. And now is trying to expand the market. 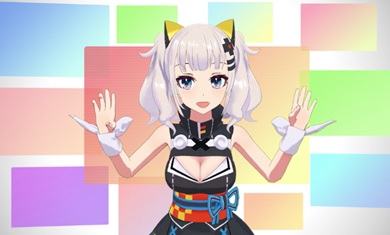 Kaguya Luna debuted as a virtual YouTuber (VTuber) in Dec, 2017. She got more than a million views in a short period of time and became the top channel in the growth rate of subscribers. These put her under the spotlight. The number of channel subscribers has exceeded 900 thousand and the total number of viewing is over 70 million by Feb, 2019. Her humor and inborn charm are her strongest weapons. She is now gaining popularity and becoming the new generation pop icon.

In Jul, 2018, Sony Creative Products (SCP) signed a contract with Sony Music Labels SACRA MUSIC and held the world’s first ‘VR Live @ Zepp VR’ on 31st Aug in the same year. The tickets were sold out in a second and successfully attracted more than 5,000 audiences in 15 venues in 7 cities in Japan.

The second song released, ‘Dirty Party feat. Ebiba’, can said to be the next generation rock party tune which is full on edgy and humor. The first song ‘Kaguya Luna’ is the same as the second one, the lyrics are by Kaguya Luna. Both of the songs got the 1st and 2nd place in iTunes alternative ranking. Besides, the song got the 6th in iTunes allover ranking, the 1st in amazon digital music ranking, the 3rd in mora daily single ranking.

Also, the second live ‘LIVE @ ZeppVR2’ is going to be held in the virtual space ‘Beyond The Moon’ on 1st May. The tickets were sold out immediately as last time. Audience can join the explosive live concert at Zepp, Diver City in Tokyo.