Under the cooperation of Walt Disney Japan, the Tokyu Group will offer the Christmas Promotion “TOKYU CHRISTMAS WONDERLAND 2017 – Disney DREAM MOMENTS” during the period from November 1st to December 25th to the Tokyu Group’, “Street” where the facility is located, and “Station” and “Train” connecting the city and the town. This year, with the theme of “DREAM MOMENTS”, they are selling the Disney products including limited items, Christmas with Disney theme decorating. Encourage with the city of Christmas season with the characters and works which loved by people all over the world such as “Mickey Mouse” “Frozen” “Winnie the Pooh”. 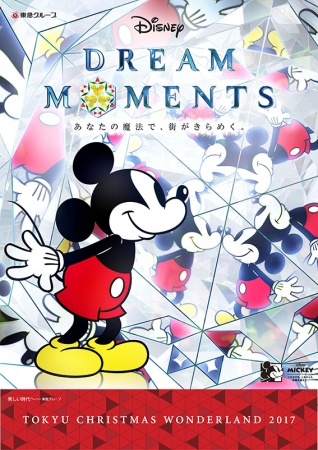 As part of that, the second Christmas that Tokyu Plaza Ginza welcomes is come with the theme of the Disney movie “Frozen” with the production of the coloring the inside of the hall with beautiful ice crystals like Elsa’s magic. On the 6th floor the “KIRIKO LOUNGE”, the ceiling height about 27 meters and a fantastic space where snowflakes dance will appear, with installation the image of Elsa’s magic. Also during the Christmas campaign period, they released a lot of Disney items at some shops in the hotel. The lineup will be at Tokyu Plaza Ginza, which adds fine quality to playfulness.